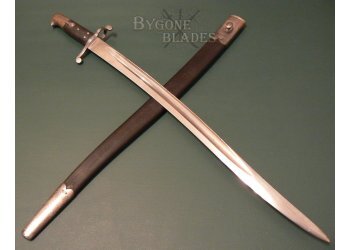 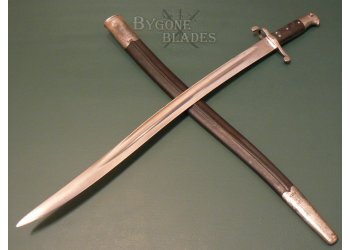 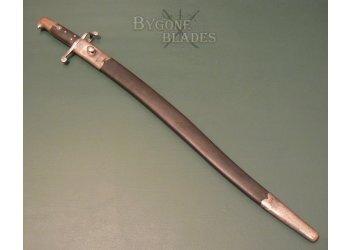 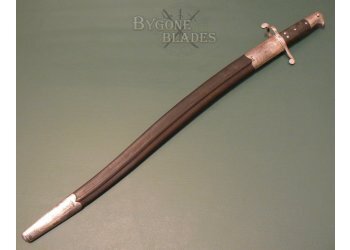 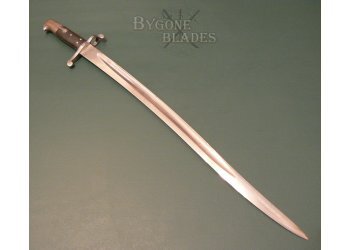 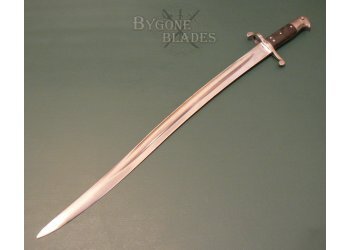 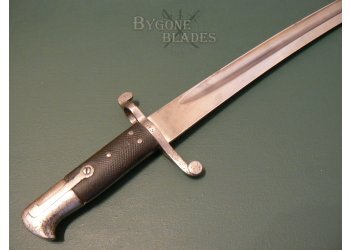 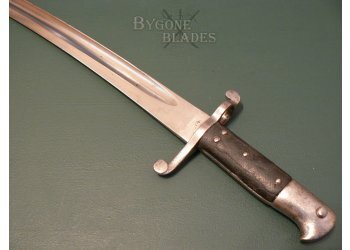 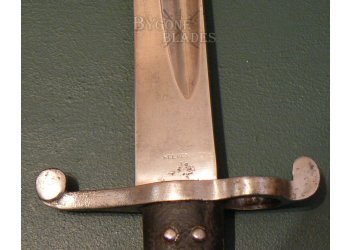 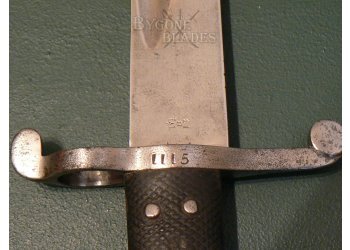 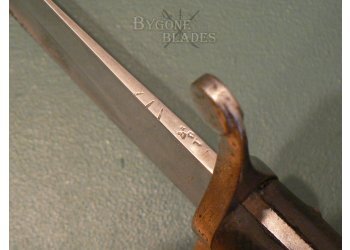 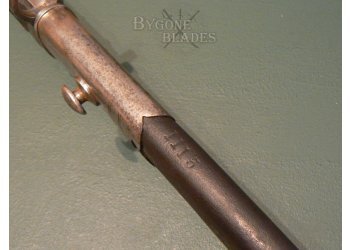 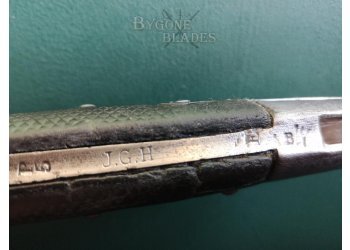 This pattern 1856 British sword bayonet was made for the Model 1853, .577 calibre Enfield rifled infantry short-musket. As well as being issued to British units, these rifles and bayonets were sold in large numbers to both the Union and Confederate armies during the American Civil War.

The 580mm yataghan blade has a flat spine and broad single fuller on both sides. The recurved (Yataghan) blade has a 180mm upper false edge. The blade is in excellent condition and retains its original armoury edge with no evidence of additional sharpening. There are some tiny patches of tarnish and very minor, shallow pitting along the edge and spine. These are barely noticeable.

The ricasso bears the maker’s name, “Reeves.” Charles Reeves & Co of Birmingham advertised themselves as makers and exporters of edged weapons and plantation tools. While they did share in British War Department contracts for swords and bayonets, they had a large export market, particularly to the Americas. The absence of any British War Department ownership stamp, bend test, manufacture date and Royal cypher indicates that this bayonet was made for private sale or export, probably to America for use in the American Civil War. The obverse ricasso is stamped with a Birmingham inspection stamp and the underside of the blade forte bears another Birmingham inspection stamp and three incised lines.

The iconic steel crosspiece with cockscomb and button finials is bright and free of rust, with some scratching and mild pitting. The crosspiece is stamped with the number 1115. The interior of the muzzle ring is flush with the tang of the blade, indicating that this is a true 1856 model bayonet, as opposed to the later, re-worked 1858 model. The step up to the muzzle ring on the later versions was to allow for the barrel band, which included the lug onto which the 1858 model bayonet was fixed. The internal muzzle ring diameter is 21mm.

The press-stud and external spring locking mechanism work perfectly and the sharply beaked pommel bears a stamped numeral 301. The leather grip scales are in fair condition with some age related cracking to the leather. The spine of the tang bears numerous stamps that may indicate which side or unit used the bayonet.

This is a very good example of a sought after British made yataghan bayonet that may have seen service during the American Civil War.