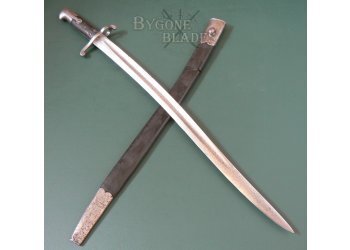 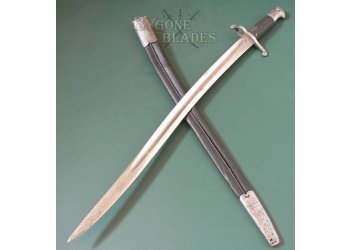 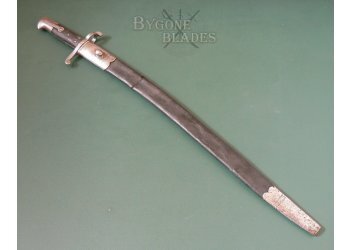 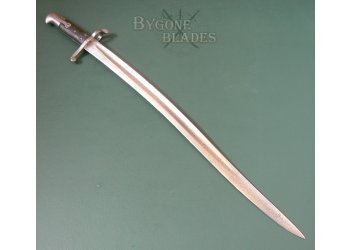 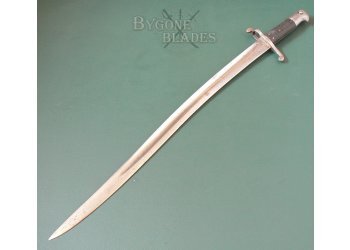 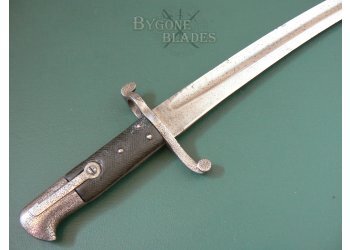 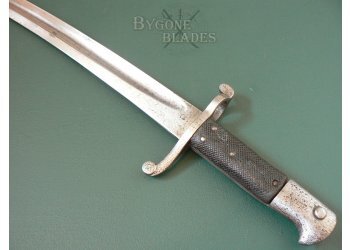 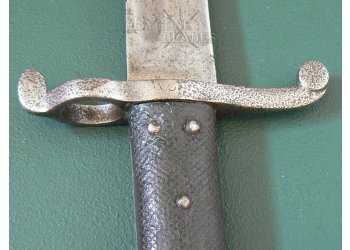 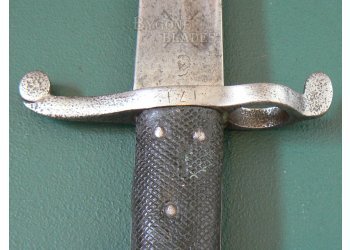 This rare pattern 1856/58 British sword bayonet was made for the Model 1853, .577 calibre Enfield (2-band) rifled infantry short-musket. As well as being issued to British units, these rifles and bayonets were sold in large numbers to both the Union and Confederate armies during the American Civil War. This bayonet is a typical example, as it does not bear British military issue or War Department ownership stamps.

The 577mm yataghan blade has a flat spine and broad single fuller on both sides. The recurved blade is double-edged for the last 120mm. The blade was service sharpened. The ricasso bears the Knight’s helmet logo of the makers, Kirschbaum, of Solingen, Germany. The absence of any British use or ownership stamps indicates that this bayonet was produced in Germany for export. The main export market for these bayonets at this time was America, for use in the American Civil War.

The blade is in fair to good condition and is free from rust but has speckled tarnish along its length and a couple of small areas of shallow pitting at the point.

The iconic steel crosspiece with cockscomb and button finials has a pale mottled patina and shallow pitting. The centre of the crosspiece is engraved with the number 1742 and the obverse of the crosspiece bears remnants of lettering. The small (approx. 3.5mm) step from the tang of the blade to the interior of the muzzle ring identifies this bayonet as being the 1858 model, as opposed to the 1856 model, which has no step. The step up to the muzzle ring was to allow for the barrel band, which included the lug onto which the 1858 model bayonet was fixed. The press-stud and external spring locking mechanism work perfectly. The leather grip scales are in good condition.

The bayonet is complete with its original leather scabbard with steel mounts. The steel furniture has a mottled age patina and shallow pitting. There are a couple of small rust perforations at the tip of the chape. The leather is in fair condition, there are shrinkage cracks along its length and a crack in the outer finish about a third of the way down. The stitching has perished but the leather itself is strong. The bayonet sheathes and draws smoothly from the scabbard.

This is a rare British bayonet made in Germany for the export market and may have seen service during the American Civil War.