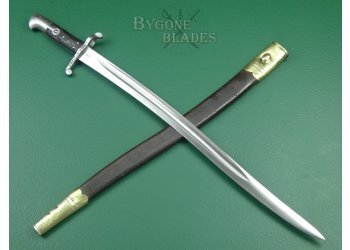 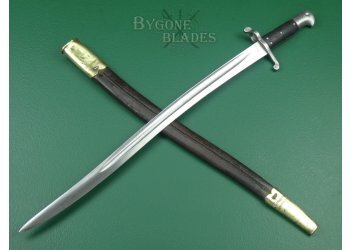 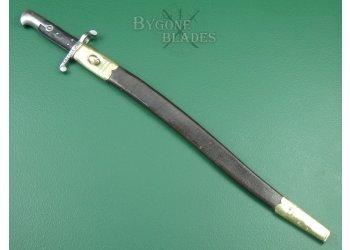 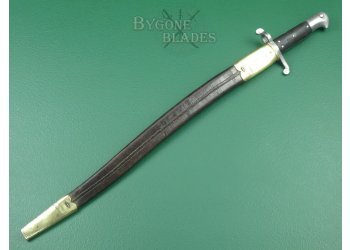 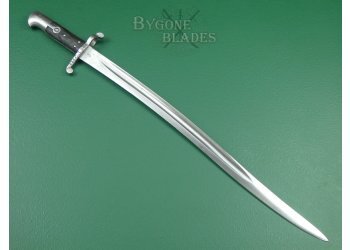 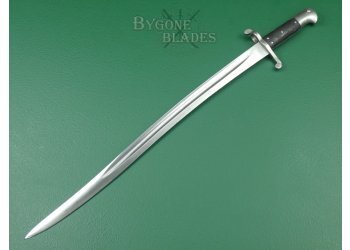 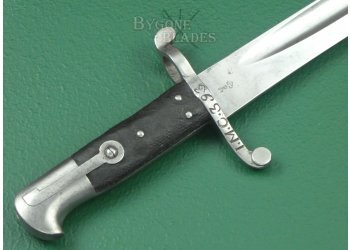 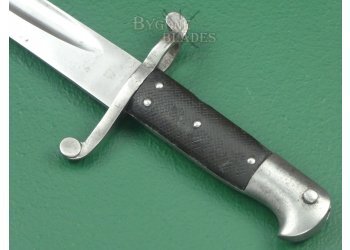 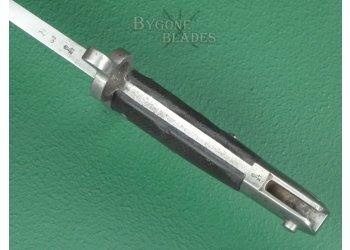 This 1856 pattern British sword bayonet was made for the Model 1853, .577 calibre Enfield rifled infantry short-musket. These rifles and bayonets were used by both British and colonial forces. This bayonet bears the unit markings of the British Indian armies’ Mule Corps, an early forerunner of the Army Transport Corps.

The 580mm yataghan blade has a flat spine and broad single fuller on both sides. The recurved (Yataghan) blade has a 180mm upper false edge. The blade is in excellent condition with some small and very minor spots of pale tarnish. The ricasso bears a Broad Arrow and WD above an Enfield factory inspectors’ mark. The obverse ricasso is stamped with the crowned cypher of Queen Victoria.

The iconic steel crosspiece with cockscomb and button finials is bright and free of rust. The crosspiece is deeply engraved with the unit marking 1. M. C. 393. This is likely to be the unit marking of the 1st Mule Corps, a supply and transport corps of the British Army in India.

The press-stud and external spring locking mechanism work perfectly. The end of the sharply beaked pommel bears a Broad Arrow stamp.  The leather grip scales are in good condition with wear commensurate with age and use.

The bayonet is complete with its original leather scabbard with brass mounts that are also indicative of Indian service. The scabbard is in excellent condition. The brass locket has some small dings. The mouth of the locket is stamped with the 1st Mule Corps markings. The leather is in excellent condition and the stitching is intact and tight. The bayonet sheathes and draws smoothly and is held firmly within the scabbard.

This is a great example of a true 1856 pattern yataghan bayonet with scarce Mule Corps unit markings.