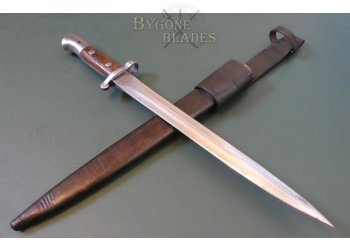 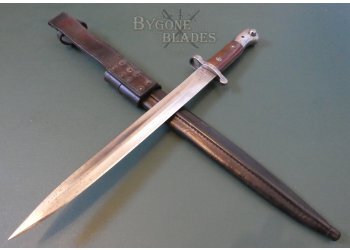 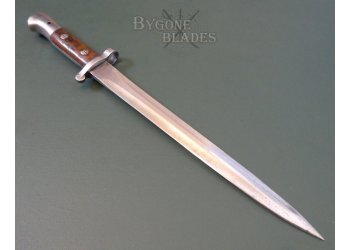 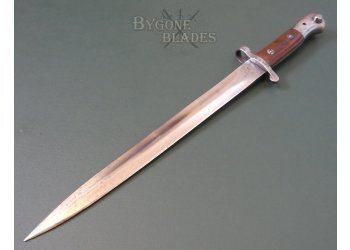 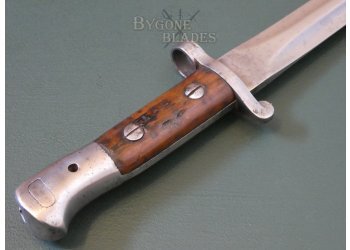 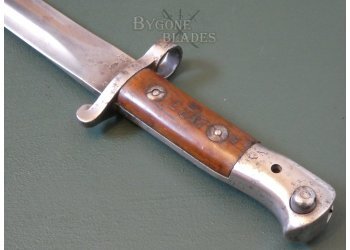 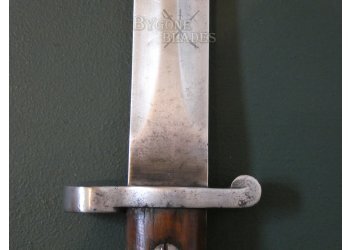 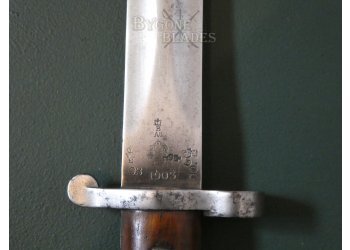 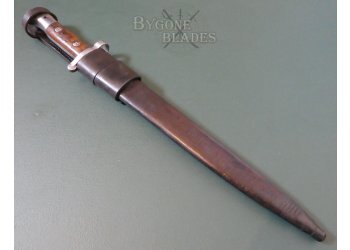 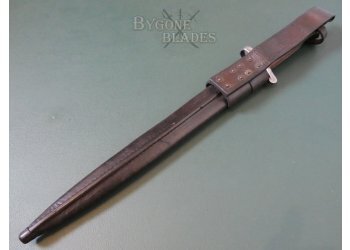 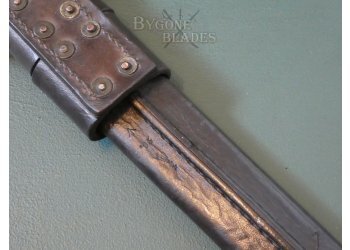 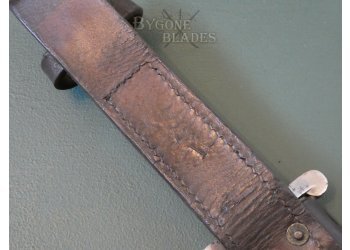 The P1903 design combined the P1888 blade and crosspiece with a new pommel design. Many 1903 pattern bayonets are actually P1888 bayonets that have been converted. This bayonet is an excellent example of a Mole made, Sanderson converted P1888.

The P1903 had a short service life as the blade wasn’t thought to be long enough, having less reach than most European bayonets when combined with the shorter Mk1 rifle. The P1903 was produced for British use from 1903–1907, at which time the P1907 was adopted.

This example is in very good condition. The 303mm double-edged blade is bright and clean with faint, pale speckles of tarnish. The blade has been service sharpened. The blade has a flattened diamond cross-section with a raised medial ridge and terminates in a spear point. The ricasso is faintly stamped with the War Department broad arrow, bend test stamp and inspection stamp.

The obverse ricasso bears a faint crown stamp of King Edward VII, the pattern date, 1903 and the original manufacture date of May, 1897, indicating that this bayonet was originally an 1888 pattern. The maker’s name, Mole is stamped across the Edwardian crown and there are three re-issue date stamps, ’06, ’08 and ‘09 and four inspection stamps.

The steel crosspiece and pommel retain their original polished finish with minimal age related marks. The pommel bears an “N” denoting naval issue. Beside this is a “Y,” indicating that the bayonet was passed to the Yeomanry. This is supported by the late re-issue dates, particularly that of 1909.

The end of the pommel is stamped with the initials “SB & N,” indicating that the conversion from P1888 to P1903 was carried out by Sanderson & Neubold of Sheffield. The press-stud locking mechanism works perfectly. The wooden grip scales are in good condition with age and use related marks and dings. The grip scales are stamped with A123 on one side and an obscured letter and number combination on the obverse. These may be Royal Navy related and may correspond to a gun crew.

The black leather Mk1 Land pattern scabbard is in great condition. The scabbard has an integral frog and internal chape. The frog is stamped with a worn Broad Arrow, the number 18 and a worn inspection stamp. There are two small cracks in the leather at the top of the first band. The leather of the scabbard is stamped with the pattern date ‘03, a Broad Arrow and an inspection stamp. The stitching is intact and in good condition. The bayonet sheathes and draws smoothly and is held firmly within the scabbard.

This is a very good example of an increasingly hard to find British P1903 bayonet complete with a rare Mk1 Land pattern scabbard.