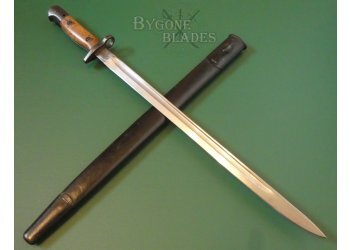 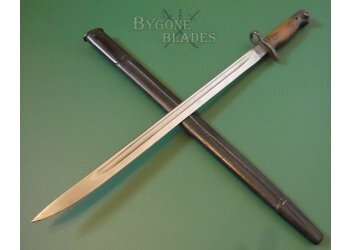 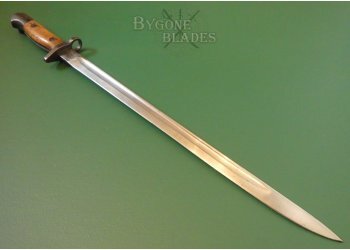 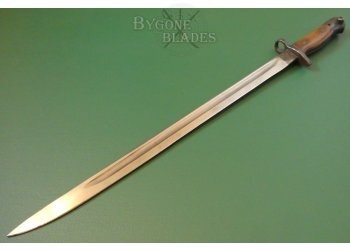 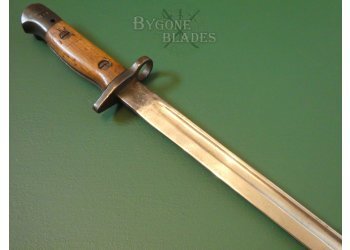 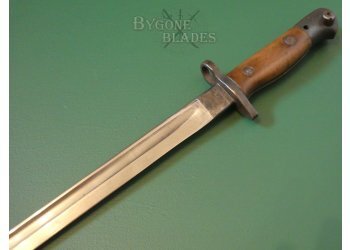 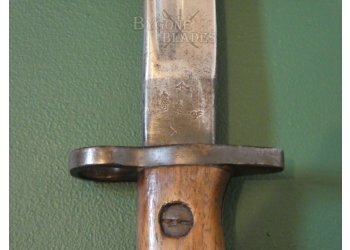 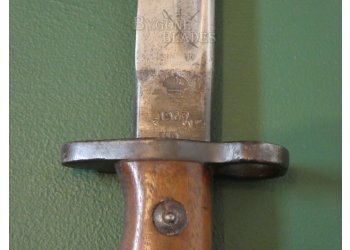 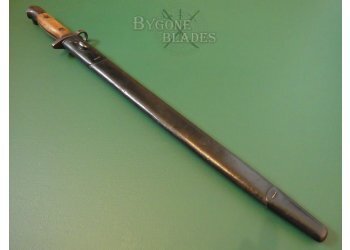 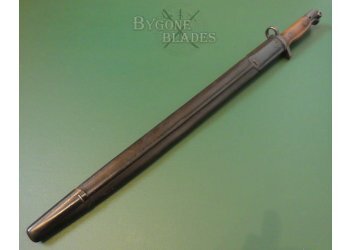 This British 1907 pattern bayonet was made by The Enfield Small Arms factory in March 1915. Ian Skennerton, in his book on British and Commonwealth Bayonets, reports that bayonet production by Government factories stopped in 1915 as it was decided that these factories should focus on the production of rifles and other, harder to produce items. The wartime production of bayonets was continued by private firms like Wilkinson, Sanderson, Chapman, etc. who had already been producing bayonets under government contract.

Approximately 4,930,000 pattern 1907 bayonets were produced by the end of World War One. The Enfield factory only produced 500,000 in total, including 230,000 first pattern bayonets with the hooked quillon.

The 433mm, single edged blade has a long narrow fuller and rounded spine. The edge was service sharpened. The blade is in very good condition.

The ricasso retains its original blueing and is marked with the Georgian crown over the pattern date 1907 and the date of manufacture 3 ’15 (March 1915) below which is stamped “EFD.”

The obverse ricasso bears the War Department broad arrow, bend test stamp and two Enfield inspection stamps. There is also a partially struck number that appears to be ’26, probably the date when the clearance hole was drilled in the pommel as these were not a feature of the 1907 pattern at the time this bayonet was made.

The cross guard, muzzle ring and pommel are in excellent condition and retain their blued finish. The press stud and catch mechanism are crisp and in perfect working order. The wooden grip scales are in good condition with age related wear and colouration. The scales are held firmly in place by the two original screws. The pommel bears the mark 1.1.

The bayonet is complete with its No.1 Mk ll black leather scabbard with a teardrop stud. The scabbard is in excellent condition. The leather and stitching are sound and the leather is stamped with the War Department arrow. The steel locket has a crowned Enfield factory inspection stamp. The bayonet sheathes and draws smoothly and is held firmly within the scabbard.

This is a very good example of an iconic British P1907 bayonet produced by the Enfield factory.