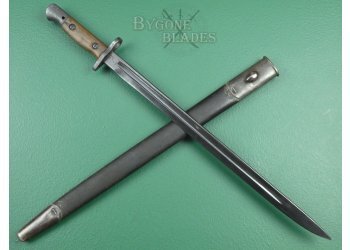 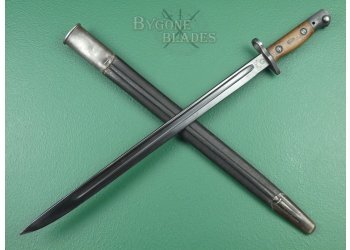 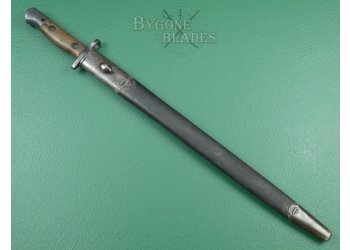 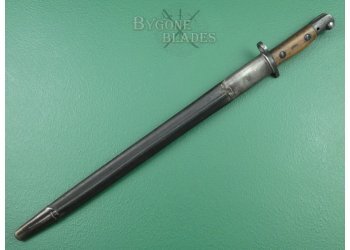 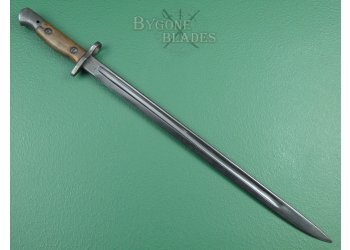 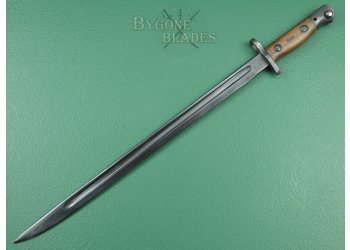 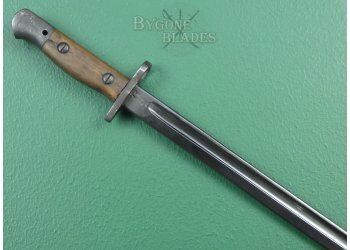 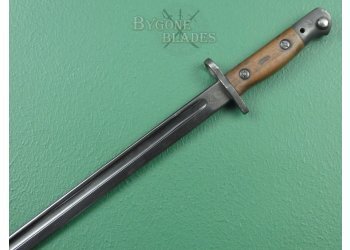 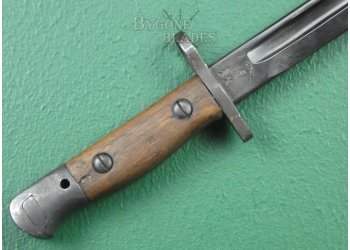 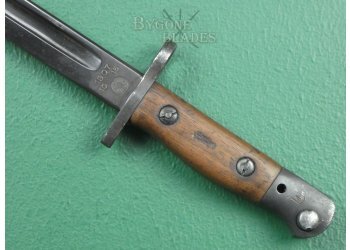 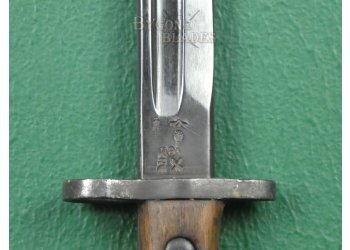 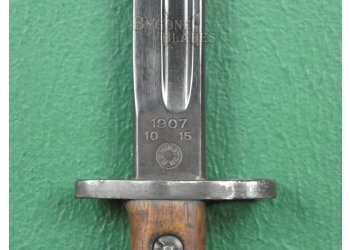 This British 1907 pattern bayonet was made by the Remington Arms Company in America in October, 1915. The first delivery from Remington to the UK was in July 1915.

Post WW1 the bayonet was refurbished and supplied to the South African government.

The 429mm, single edged blade has a long narrow fuller and rounded spine. The blade retains its original factory edge. The blade is in excellent condition and retains its later black finish. The point of the blade at first glance appears to be missing but the black finish covers the point so clearly this is how the bayonet left the factory after its refurbishment in 1919.

The ricasso is marked with the pattern designation, 1907 and the date of manufacture 10 ’15 (October 1915) below which is stamped the circular Remington maker’s mark.

The obverse ricasso bears the War Department broad arrow and bend test stamp, an Enfield inspection stamps and a British, American based inspector’s stamp. There is also a date number ‘19 (1919), this is likely to be the date when the blade was blackened and the clearance hole drilled in the pommel. An additional stamp of “ENG” is beside the additional date mark and 1919 is also likely to be the date that the bayonet was provided to the South African Government. The pommel showing a Union of South Africa ownership stamp.

The cross guard, muzzle ring and pommel are in good condition and retain their blued finish. The press stud and catch mechanism are crisp and in perfect working order. The pommel is stamped with the arrow within a U mark of the Union of South Africa. The wooden grip scales are in good condition with age related wear and colouration. The scales are held firmly in place by the two original screws.

The bayonet is complete with its South African marked black leather scabbard with a teardrop stud. The scabbard is in very good condition. The leather and stitching are sound and the leather is stamped with the date ’19, the Union of South Africa ownership mark and an arrow. The bayonet sheathes and draws smoothly and is held firmly within the scabbard.

This is an excellent example of a rare Remington made British P1907 bayonet that was passed to the South African military after WW1.