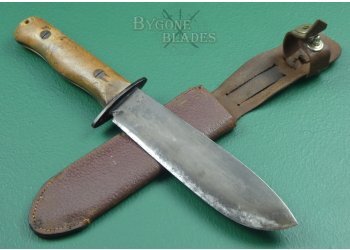 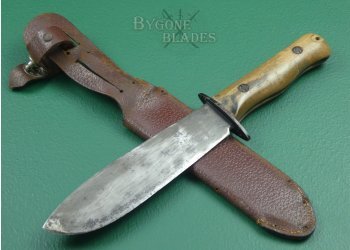 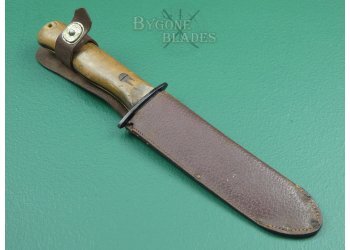 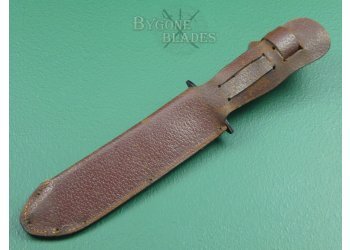 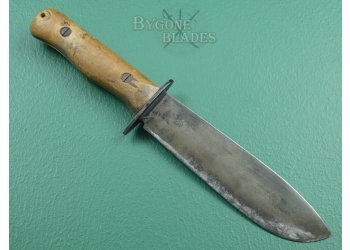 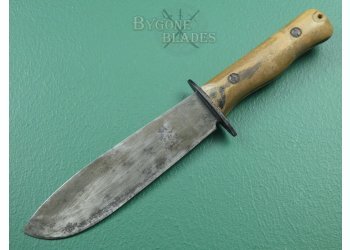 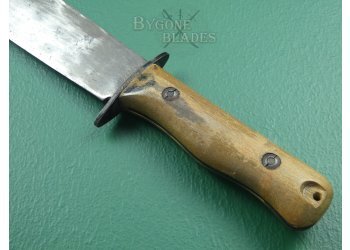 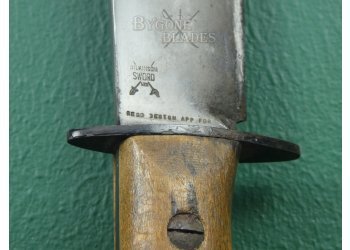 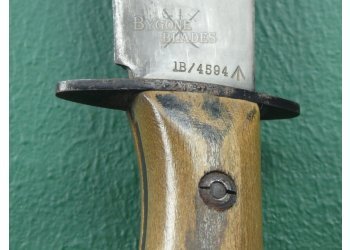 The Type D survival knife was introduced in the 1950’s and was produced by the Wilkinson Sword Company of London. The heavy duty knife was well-made, strong and versatile and was initially issued to members of the British Special Forces and to RAF aircrew.

The 184mm heavy, single-edged blade has a thick, flat spine and terminates in a hatchet point. The unfullered blade has a wedge-shaped cross section and retains a very sharp edge. The blade is in good used condition with fading and wear to the original blued finish and patches of darker tarnish. These knives were originally issued with either polished, Parkerised or blued blades.

The base of the blade is stamped with the Wilkinson Sword Company trademark and “REGD DESIGN APP FOR.” The obverse bears the pre-NATO stores designation, “1B/4594” besides the War Department Broad Arrow mark.

The hardwood grip scales are secured to the full width, “solid” tang with two 1907 pattern screw bolts and washers. Later examples have the grips secured by copper rivets. The grip scales are in good condition with staining and patina consistent with age and use. The pommel has a lanyard inlet.

This early pattern Type D knife is complete with its original leather scabbard. The scabbard is in overall good condition with damage to one side at the rear where the retaining loop threads through. The press-stud clasp is in good working order and bears the words “LIFT THE DOT.”

This is a great and honest example of a scarce, early Type D survival knife made by the Wilkinson Sword Company.