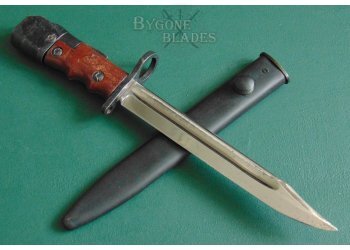 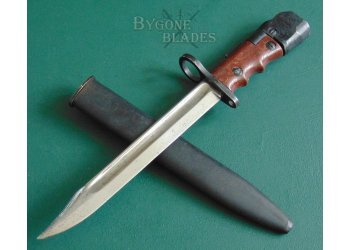 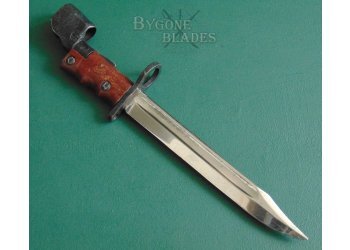 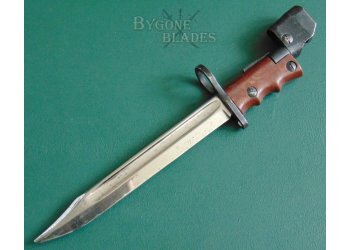 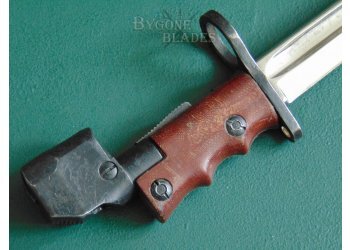 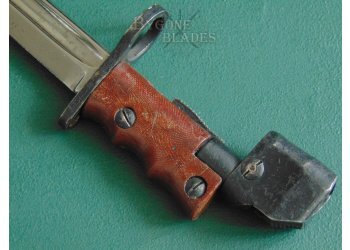 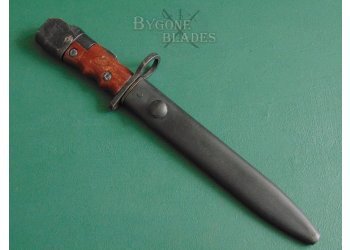 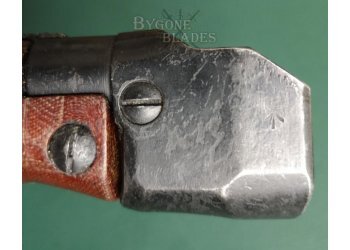 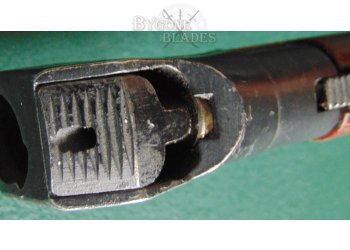 These scarce bayonets were made for use with the Sten MkV sub machine gun. Originally they were also intended for the Lee Enfield No.4 rifle but after incidents involving rounds hitting the muzzle ring were only issued with this rifle for parade purposes.

This bayonet was probably made by Elkington & Co., Birmingham and is one of only 20,000 made by them.

The No7 Mk 1 Land service bayonet was designed in 1944 and a total of only 330,000 were produced. The design was perfected by the Wilkinson Sword Co., who produced 1,000 bayonets in 1944 and subsequent production was carried out by four others makers from 1945 until 1948.

The bayonet’s innovative design with its unique swiveling pommel allowed it to be both bayonet and fighting knife with deep finger grooves in the hilt which is made of resin impregnated cloth called Paxolin.

The 207mm clip point blade has a deep single fuller on both sides, is in very good condition with pale speckled tarnish to the original polished finish. The blade was sharpened and has some faint sharpening and scabbard related scratches.

The swivel pommel retains its original black finish and bears the War Department broad arrow above what appears to be a very faint 78. The Elkington Factory’s wartime dispersal code was M78. The front of the socket and the catch are also stamped with broad arrows.

The Paxolin grips are in good condition with some mild, age appropriate wear.

The bayonet is complete with its No.5 scabbard in condition.

This is a scarce and highly collectable bayonet in great condition.