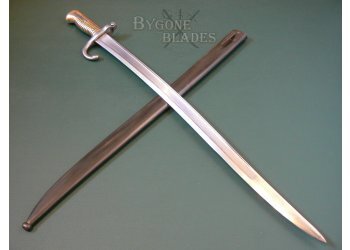 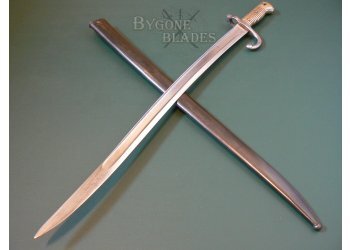 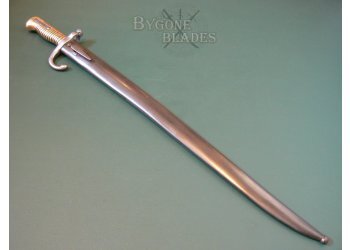 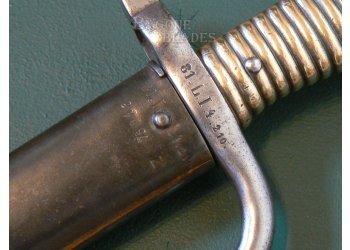 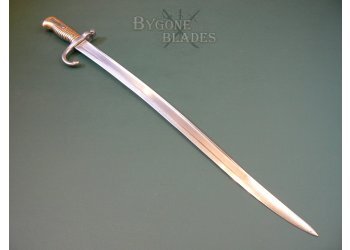 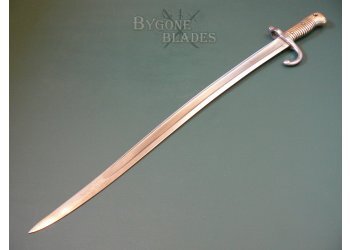 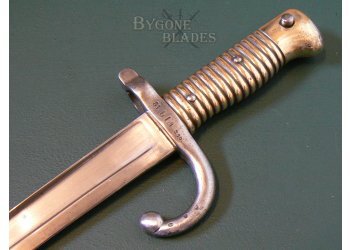 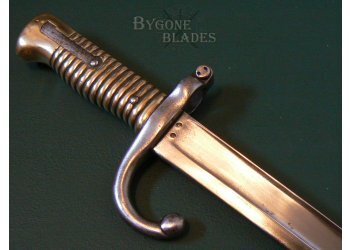 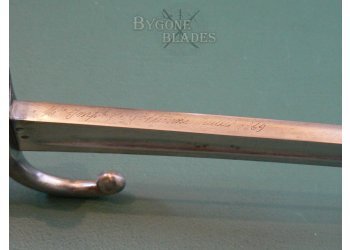 Scarce Prussian re-work of the iconic French model 1866 sword bayonet for the Chassepot rifled musket. After winning the Franco-Prussian War of 1870-1871, the Prussians seized French weaponry as spoils of war. Amongst these seizures were Chassepot bayonets. The steel scabbards were modified by removing the French frog attachment and replacing it with an extended tear-drop frog stud. Often the French inspection poincon and spine engraving were filed off the blades.

The 576mm yataghan blade has a wide, flat spine and broad single fuller. The spine retains its engraving, showing the bayonet was made in July 1869 at the St Etienne armoury. The blade is in excellent condition. The ricasso bears two French poincon.

The brass hilt in in great condition. The press stud and external spring mechanism work perfectly.

The rolled steel scabbard bears matching unit markings and is in excellent condition without dents or damage and retains its blued finish.  The scabbard also bears a second Prussian unit marking indicating that this bayonet had a long service life. The original French frog bar has been removed and replaced with an elongated teardrop frog stud. The teardrop stud is markeded with a Prussian inspection stamp (fractur). The bayonet sheathes and draws smoothly and is held firmly within the scabbard.

This is an interesting and hard to find French made, Prussian bayonet. Taken as spoils of war and modified for service in the Prussian infantry.