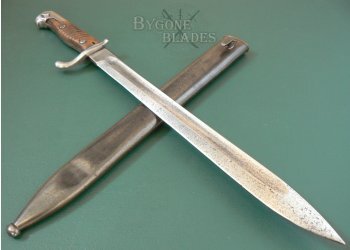 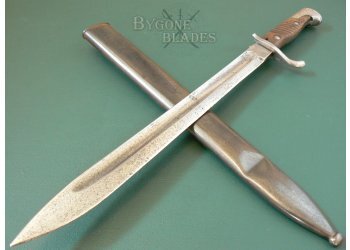 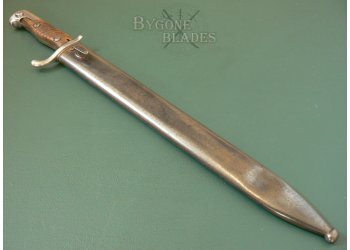 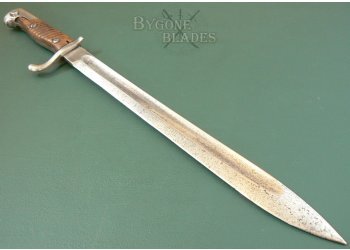 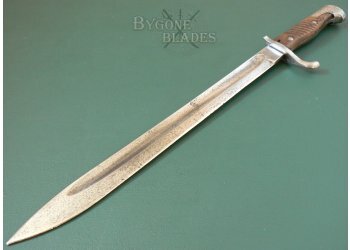 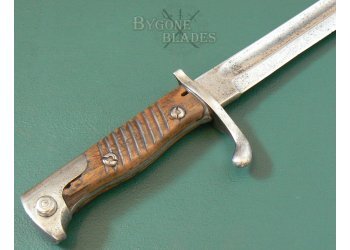 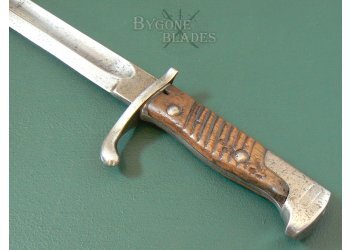 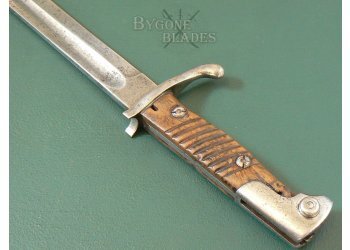 The S98/05 bayonet was typical of German bayonets of the period in that it only had a vestigial muzzle ring, often referred to as “high ears”. The bayonet relied on the length of its hilt mounting to fix the blade to its rifle. At the beginning of WWI, it was found that the S98/05 had a problem when used with the Karabiner 98 rifle. The shorter barrel on this rifle caused burning and damage to the grips because the barrel finished before the vestigial muzzle ring. In 1915, it was decided to fit a steel flash guard to the back of the hilt to protect the grips.

The bayonet was further modified by grinding off most of the vestigial muzzle ring.
To distinguish between newly made bayonets with the flash guard and almost no muzzle ring, newly produced ones were designated S98/05n.A. (neuer Art - new type) while the addition of the letters “aA” (alter Art- old type) designated an original bayonet with modifications.

The changeover between the a.A. and the n.A. patterns led to bayonets that were neither one version nor the other, these are known as transitional pattern bayonets. This means that you can find “high eared” bayonets with flash guards, and “low eared” examples without. The length of the “ears” on the vestigial muzzle ring, along with the date stamp on the spine are used to identify the base model. Transitional S98/05 bayonets are rare.

Rarer still are un-altered first pattern S98/05 bayonets like this one. This original S98/05 was made in 1914 by Weyersberg Kirschbaum & Cie, Solingen. The bayonet has “high ears” and no flash guard.

The 365mm single edged blade has a wide, single fuller below a flat spine. The blade is 26mm wide at the ricasso and flares to a width of 32mm before tapering to a point, earning it the nickname, “Butchers’ Blade” because of its similarity to such knives.
The blade is marked on the ricasso with the maker’s details. The spine carries the Royal Cypher of Kaiser Wilhelm II above the date stamp “14” (1914) and a crowned acceptance stamp. The blade has mild speckled tarnish but remains bright and free of rust.

The steel of the hilt bears several inspection stamps. The screws that hold the wooden scales in place are stamped on both sides, the front of the mortice slot is stamped and the pommel bears two stamps. The press-stud mechanism is on good working order.
The wooden scales are held firmly in place but show circular dents and chipping near the pommel.

The bayonet is complete with a steel scabbard that retains its original blued finish. The scabbard is in good condition with a dent on either side near the bottom. The throat of the scabbard bears two inspection stamps. The bayonet sheathes and draws smoothly and is held firmly within the scabbard.