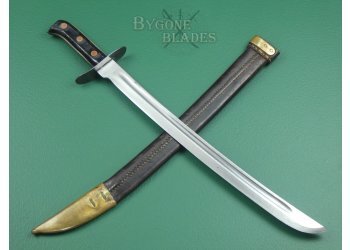 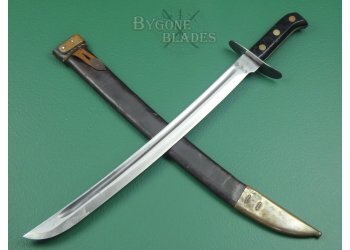 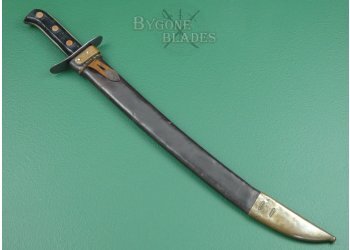 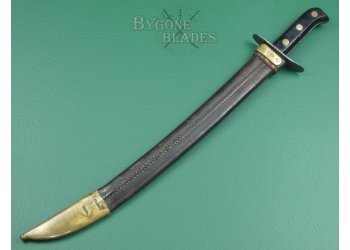 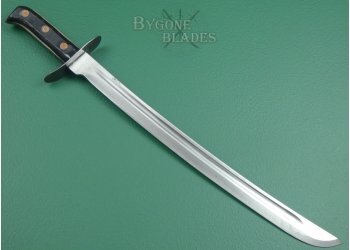 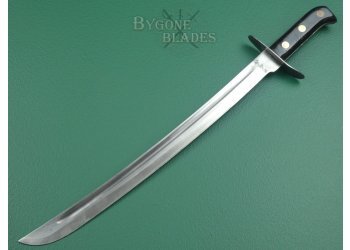 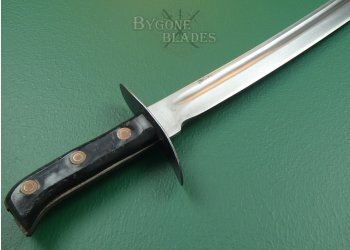 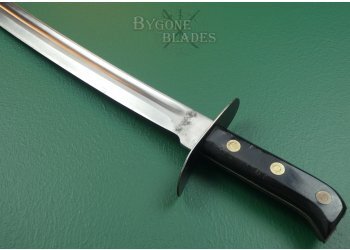 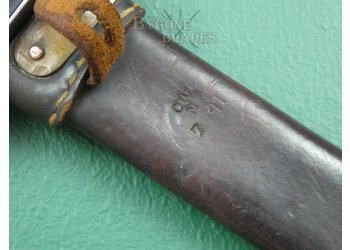 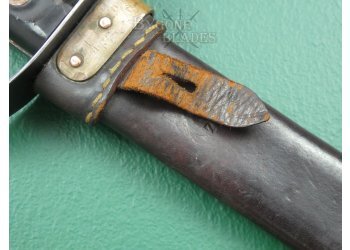 An interesting and scarce American made Model 1941 naval cutlass based on the Dutch Klewang. This cutlass was captured by the Japanese in the Pacific during World War Two.

This Japanese re-worked cutlass, colloquially known as a “Heiho” was made in July 1941 by the Lilley-Ames Company of Columbus, Ohio.  The Lilley-Ames Co., (formerly Ames) contracted to produce nearly 3000 cutlasses for the US Navy in 1941. During the same period, they also produced approximately the same number of klewangs for the Dutch (Netherlands) East Indies army. These Dutch East Indies cutlasses, made by Lilley-Ames were assembled and shipped by the Vince Fencing Equipment Co. and stamped “VINCE.” The cutlasses made and assembled by Lilley-Ames for the US navy were unmarked and had either black Bakelite or black stained wooden grips instead of the plain wood grips of those for the Dutch contract.

Historian and author, Carter Rila documents that the unmarked Lilley-Ames cutlass order was completed and delivered by October 1942. Rila goes on to report that these cutlasses were sent to New Caledonia in the South Pacific where they were issued to US troops bound for Guadalcanal and photographs of US marines equipped with klewangs support this.

Cutlasses that were later captured by the Japanese were re-worked to adapt them for jungle warfare by cutting down the bowl guard, leaving just an elongated, slightly curved oval cross guard and shortening the blade - in so doing, removing the original clip-point. These re-worked weapons were then issued to Japanese infantry as side arms and also to Japanese sympathetic rebel factions.

The unmarked, 452mm single-edged blade is slightly curved and has a flat spine above a deep single fuller. The blade terminates in a hatchet point and is in very good condition and retains a sharp edge.

The blade is held firmly between two black Bakelite grip scales which are secured by three brass rivets.

The short sword is complete with its brown leather scabbard with brass reinforced throat and integral frog stud. The scabbard is in excellent condition and retains its leather frog strap, something that is usually lacking. The scabbard is stamped with the manufacturing date of July 1941.

This is a scarce variant of the Dutch Klewang, made for the US military and issued during WW2 to American troops bound for the Pacific. This cutlass was then captured by the Japanese and adapted for their use.