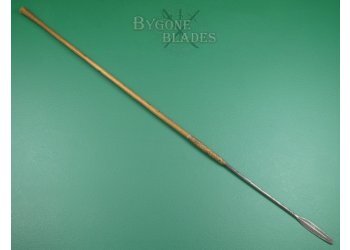 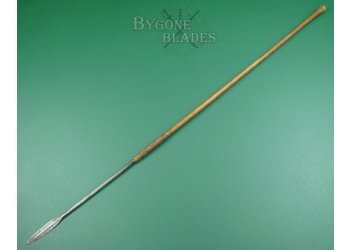 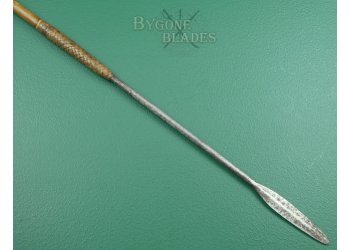 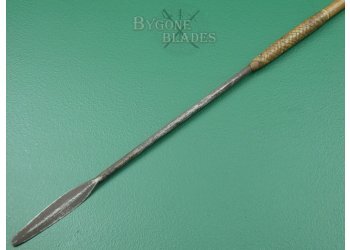 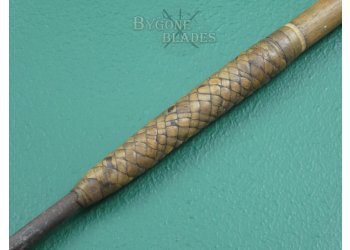 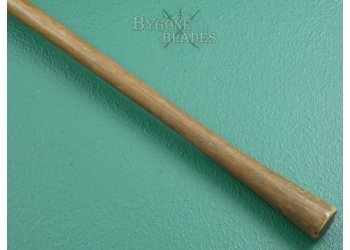 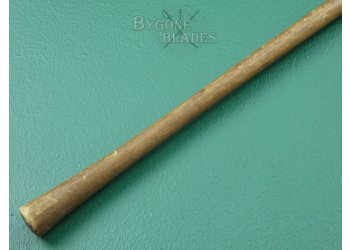 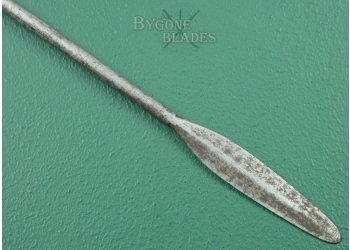 This Zulu Isijula is a Zulu War bring back and dates to the late 1870’s. After the punitive attack on the Zulu capitol of Ulundi in 1879, many such trophies were collected by the troops and brought back to the UK as souvenirs. Finding one now-a-days however is not so easy!

The hand forged blade has a flattened diamond section with raised medial ridge. The blade is in great condition with a wonderful patina and clear forging marks that add to its character.

The blade is secured firmly within the haft and woven ilala palm binding was added to strengthen the bond. The palm binding is in excellent condition.

The haft has a wonderful patina and flares nicely at the end.

While the Zulu King was responsible for providing his warriors (Impis) with shields, the individual Zulu warrior was responsible for his own weaponry. Traditionally, Zulu warriors carried at least two isijula into battle along with their iklwa and often an iwisa (knobkerrie/club). The warriors who formed the horns and centre of the traditional Zulu attack would use their isijula as they ran towards their enemy. The young warriors of the horns had the necessary speed with which to reach and attack the flanks, while the older, experienced warriors made up the centre (boss) of the attack. The first isijula would be thrown from several meters distance, the second as they closed with their enemy, distracting them for the deadly attack with their iklwa.

This is an excellent example of a Zulu warrior’s throwing spear and will make a great addition to any Anglo-Zulu War collection.