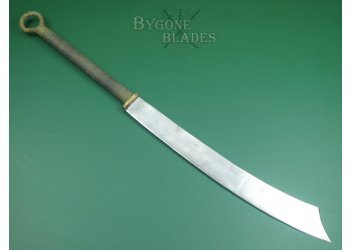 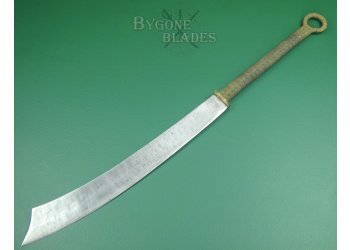 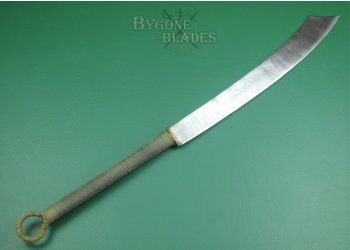 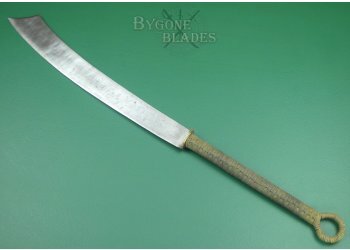 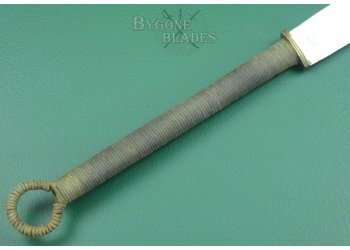 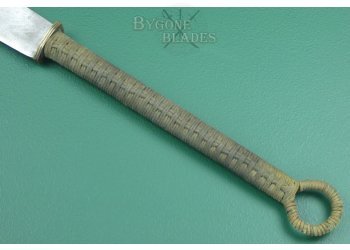 This impressive, large 19th Century Dadao (great sword) probably hails from Vietnam, although as with all such swords, it bears many similarities to those from China.

The majority of Chinese Dadao have a straight as opposed to concave forward edge and a rounded or “S” shaped guard with a rattan bound grip.

Vietnamese Dao are also of usually of higher quality, the Dao in China being a mass produced militia weapon.

This hand forged Vietnamese Dao has a heavy and sharp 584mm blade with a 9mm flat spine tapering down to 3mm at the top edge point. The blade is 53mm wide at the shoulder and 75mm at its widest.  The blade is in very good condition with a pleasing patina and remains very sharp.

The green cord wrapped grip is 395mm long and consists of the blade’s tang, which also forms the circular end to the grip, encased in wood and bound with cord. The cord is intricately knotted along the left-hand side of the grip.

This is a large and excellent example of a Dadao, infamous for their use in public executions throughout the 19th and early 20th Centuries.