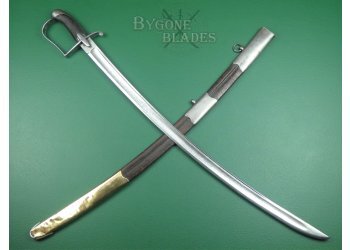 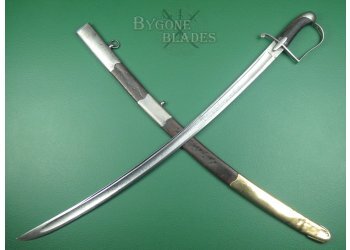 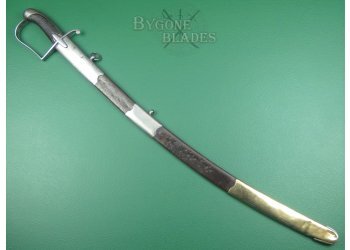 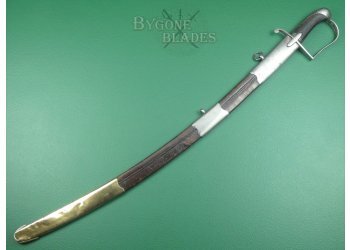 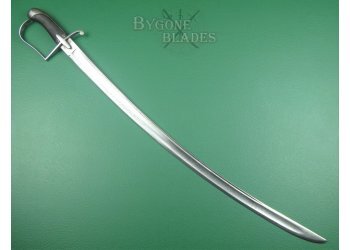 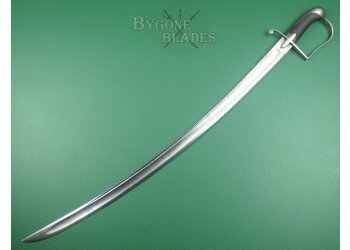 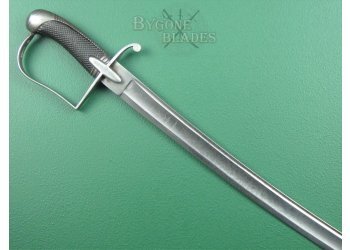 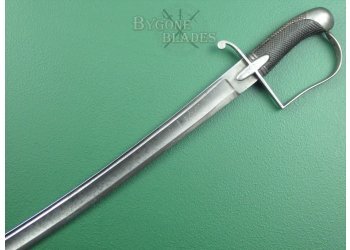 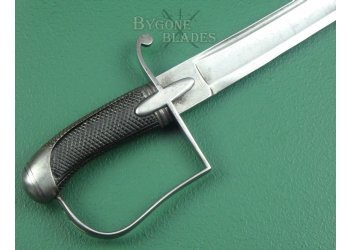 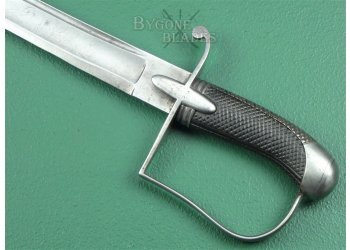 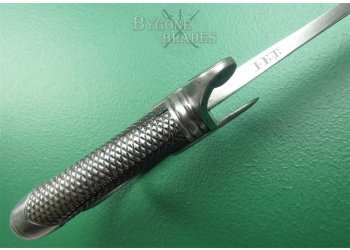 The scarce British 1788 pattern light cavalry sabre was the first regulation pattern sword adopted by the British cavalry and was closely based on examples already in use both in Britain and in Europe, particularly those used by Austrian and Prussian cavalry regiments. Although adopted by the Board of ordnance to be a regulation pattern, there were differences, particularly in hilt styles resulting from a lack of clarity in the written description and requirements published by the Board of ordnance. These differences are particularly noticeable between those sabres made in the UK and those imported from Solingen. This fine example was made in Solingen, Germany and imported to the UK by the importer, John Justus Runkel.

The 835mm curved blade is 38mm wide at the ricasso, tapering only slightly down to 32mm just before the hatchet point. The blade has a thick, flat spine above a deep, narrow fuller with a broad, shallower fuller beneath. Both fullers are long, the broader of the two running until just 54mm of the point. This style of fullered blade is known as “Montmorency.”

The spine is faintly engraved R. Solingen, an early mark of the London based, German importer John J. Runkel. The initials of the swords’ owner, “I. B. B.” are deeply engraved over the importer’s mark.

The blade is engraved in typical Solingen style with mounted hussars, flourishes and trophies of arms. The engraving is faint. The blade is in very good condition for its age and service, with a pale speckled patina.

The iron stirrup hilt has a slightly concave knuckle bow, a forerunner of the P-shaped knuckle bow on the 1796 pattern hilt. The back strap is deeply knurled, finishing in a smooth, domed oval pommel. The ebony grip is beautifully knurled and is in excellent condition. The blade is firm in the hilt.

The sabre is complete with its brown leather scabbard with an iron locket and middle band and a brass chape. Originally, the scabbard mounts would have been painted black, hiding the difference in metals used. Iron was used for the harder wearing mounts and the softer brass for the chape. The scabbard leather is tooled with a geometric pattern of lines and punch marks typical of late 18th Century British scabbards. The leather is in very good condition and the stitching is intact and tight. The sword sheathes and draws smoothly and is held firmly within the scabbard.

This is a very good example of a 1788 pattern light cavalry sabre.