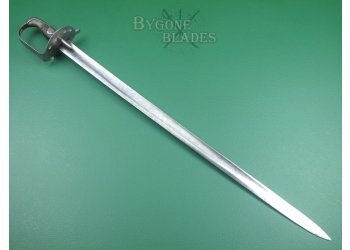 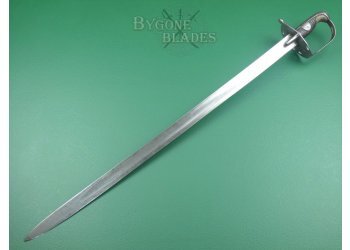 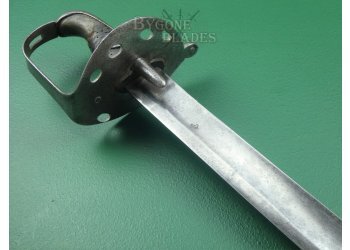 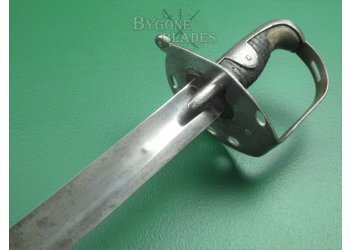 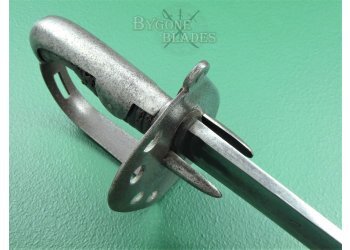 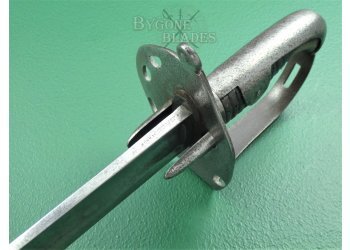 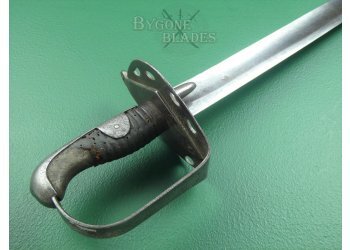 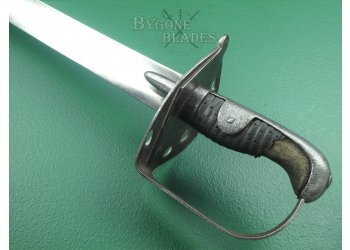 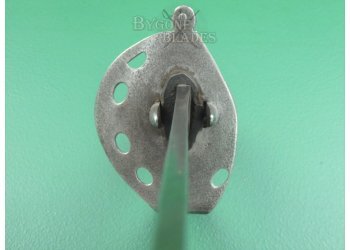 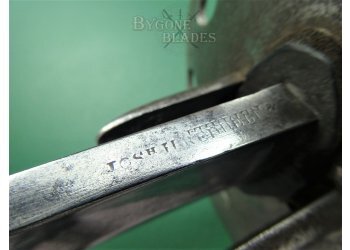 A “must have” for any collector of British cavalry swords. This 1796 pattern Heavy Cavalry trooper’s sword dates to between 1807 and 1815, making it highly likely that it saw service during the Peninsular War and maybe even Waterloo.

The 863mm single-edged blade has a flat spine above a broad, shallow fuller and terminates in a spear point. From 1812 onwards, many heavy cavalry swords had their original hatchet points ground to spear points. This modification was a result of feedback from the cavalry who found themselves disadvantaged because their hatchet points were unable to penetrate the French Cuirassiers armour and even struggled to pierce the thick woollen jackets of the French troops. A general order to re-point the blades of their swords was issued to the heavy cavalry prior to the Battle of Waterloo.

As expected, the blade was period sharpened and is double-edged for the last 170mm. The blade is in very good condition, with a pleasant patina. The spine bears the maker’s details, “JosH H. Reddell & Co.” Joseph Hadley Reddell (1775-1847) was a Birmingham maker who traded under this mark from 1807 until 1815. Reddell stopped making the 1796 heavy cavalry sword in 1815 after the Battle of Waterloo, and closed shop around 1820. The forte bears a Tower inspectors stamp, a crown over the number 4.

The steel disk guard was period modified by re-shaping the inner edge of the disk so that the sword would fit more comfortably against the wearer’s side. The modification also served to reduce wear on the trooper’s uniform. This was a common modification and may have been done by the regimental armourer at the same time as the re-pointing of the blade. The front of the knuckle bow is engraved with B over 42 which indicates the sword was issued to B troop and was weapon number 42.

The leather covered wooden grip has partial loss to the leather and has suffered from woodworm in the past. The grip has been sensitively repaired and is strong and in good order. The blade is firm in the hilt.

This is a very good example of a much sought after Napoleonic Wars 1796 heavy cavalry sword that almost certainly saw action in the Peninsular Wars and possibly Waterloo.