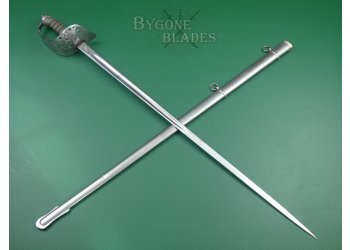 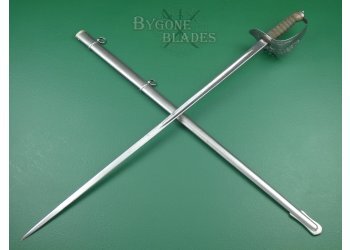 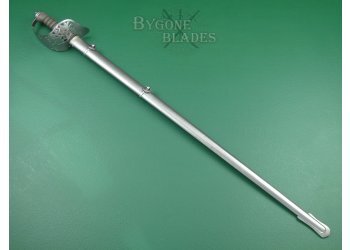 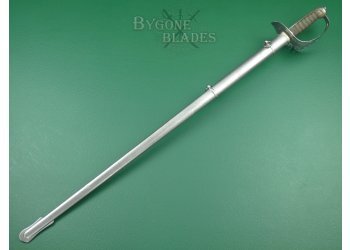 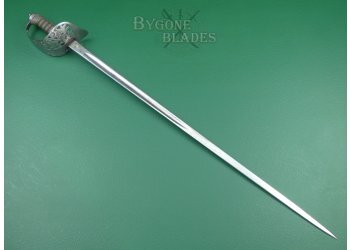 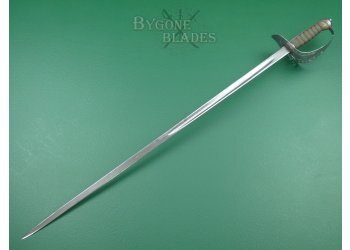 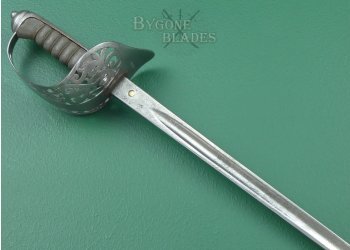 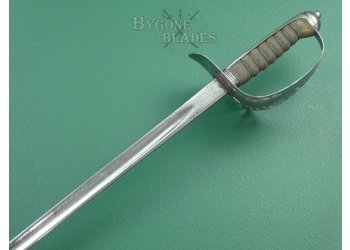 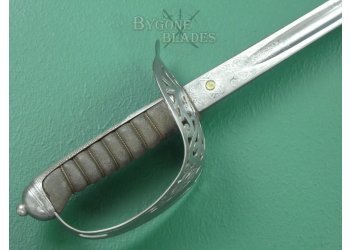 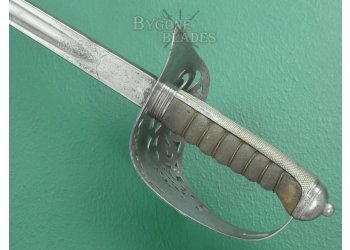 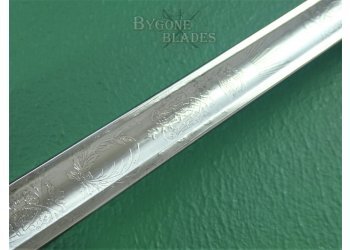 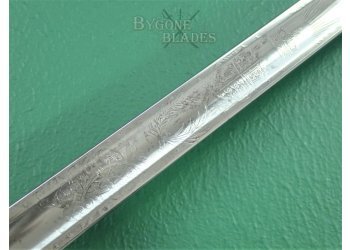 A scarce British 1895 Pattern Victorian army officer’s sword made in London and bearing a crowned proof disk associated with Hawkes & Co., who were a trade customer of the Wilkinson Sword Co. The P1895 was the predecessor of the 1897 pattern which remains the current British army sword.

The 1895 pattern sword was produced for less than 2 years before being replaced with the 1897 pattern. The main difference between the two patterns is that the P1897 has the inner edge of the guard turned down to prevent excessive wear to the officers' uniform. The beaked quillon is more pronounced on the earlier 1895 pattern and the half basket guard has larger gaps between the pierced scrollwork and cypher, giving it a more open and to my mind aesthetically pleasing look. Both patterns utilise the 1892 pattern thrusting blade.

The 820mm thrusting blade is of dumbbell form, having a symmetrical cross section with a slightly rounded spine and belly and a short central fuller. The blade becomes wedge shaped for approximately two-thirds of its length and terminates in a narrow spear point. The blade is in very good condition with minimal small patches or tarnish. The blade is etched with scrolled foliate panels, a rayed crown and the Royal coat of arms over crossed laurel and palm fronds. The obverse is similarly etched and includes the crowned cypher of Queen Victoria. The blade retains its original leather washer.

The ricasso bears a brass proof stud depicting a crown over the word “Proved.” The blade spine bears the words, “London Made.”

The steel half basket guard has pierced foliate scrollwork surmounted by the cypher of Queen Victoria.  The guard is in good condition with very mild speckled patina. The knurled back strap incorporates an oval pommel and tang button. The ray skin grip is in good condition with mild use related wear. The front of the guard, below the beaked quillon is stamped, “Steel Hilt.”

The blade is firm in the hilt.

The sword is complete with its polished steel scabbard with twin suspension rings and German silver throat. The scabbard is in good condition with a mild speckled patina.

This is a very good example of a scarce Victorian P1895. An increasingly hard to find sword.