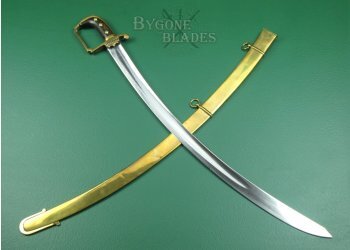 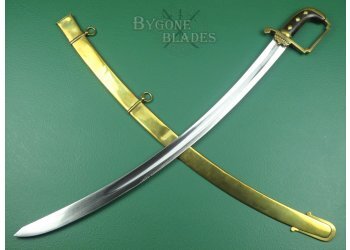 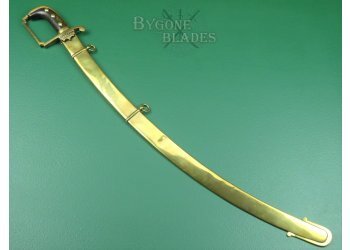 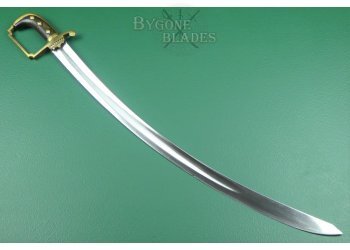 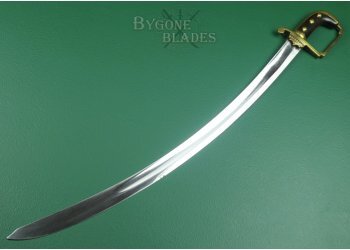 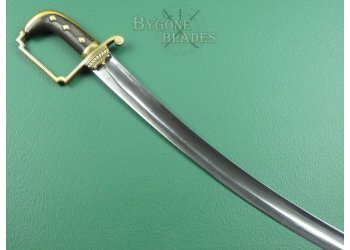 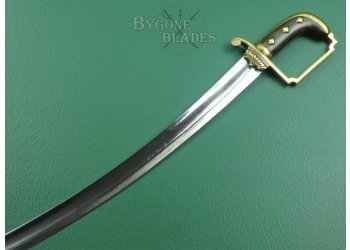 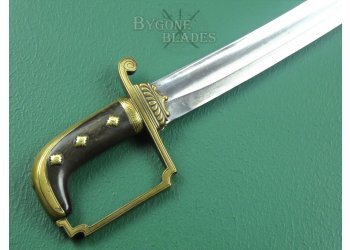 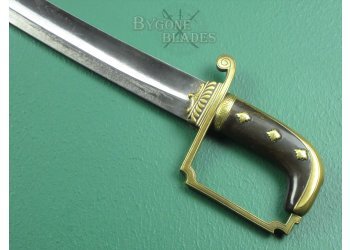 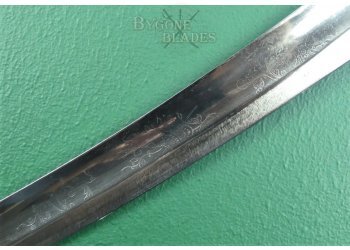 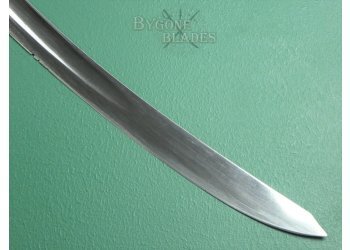 This beautiful sabre is of the pattern adopted by the 24th light Dragoons. The 24th Light Dragoons were stationed in India and saw action in the Second Anglo-Maratha Wars (1803-1805), and again in the Third Anglo-Maratha Wars (1817). These wars were a series of conflicts between the British East India Company (EIC) and the Maratha rulers of India. After a decisive victory in the Third Anglo-Maratha Wars, the EIC became the rulers of much of the Indian continent.
The 24th had a very active period of service in India, gaining the right to wear an elephant on their badge with the honour ‘HINDOSTAN’. The regiment departed from India on the 8th of October, 1818 and despite their distinguished service, on the 4th of May, 1819 the Prince Regent ordered that the 24th be disbanded.

The 710mm single-edged blade has a broad single fuller below a flat spine and terminates in a clip point. The broad blade measures 38mm at the ricasso with minimal taper down to 35mm before the clip point. The blade was service sharpened and retains a fighting edge.

The blade is in clean condition with three noticeable edge nicks and has been over cleaned in the past resulting in the etching being all but polished out. Tilting the blade in the light it is possible to make out floral motifs and trophies of arms on both sides. A maker’s name was engraved on the spine but only the letter W or M remains visible.

The 24th light Dragoon pattern hilt is of gilt brass with a squared, stirrup knuckle bow. The junction of the knuckle bow and quillon and that of the connection with the pommel are formed by a scallop, the whole with an engraved border and ending with a scrolled terminal to the quillon. The elongated pommel and smooth back strap have similarly engraved borders. The grip ferrule is engraved with a classical Grecian pattern and the centre of the crosspiece has shield langets with a classical pavilion design.

The carved and polished horn grip is riveted to the tang with three starred-diamond shaped rivets.

The hilt is in excellent condition and the blade is firm.

The sabre is complete with its gilt brass scabbard with two suspension rings. The scabbard is in good condition with a shallow dent on the outer face below the second ring band. The sabre sheathes and draws smoothly and is held firmly within the scabbard.

Although highly polished this is a great example of a scarce Anglo-Maratha Wars period 24th light Dragoon officer’s sabre dating to the early 1800's.