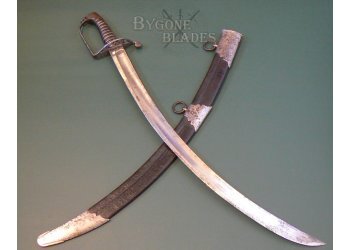 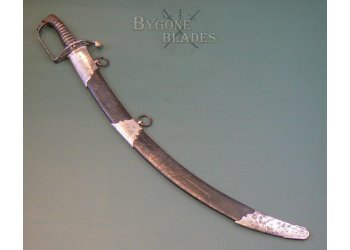 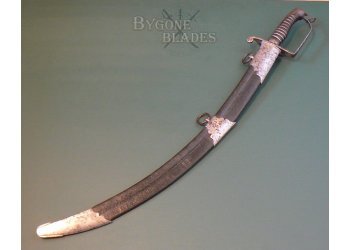 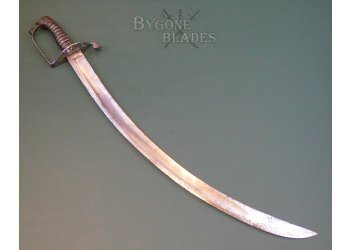 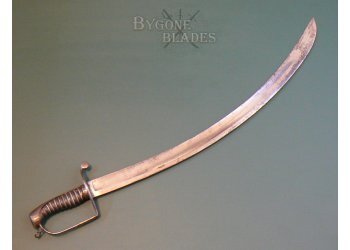 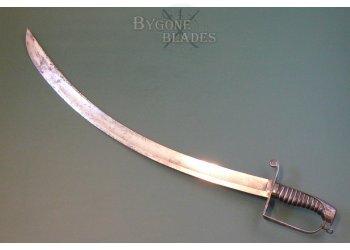 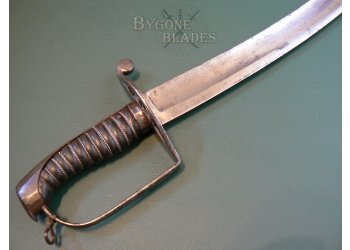 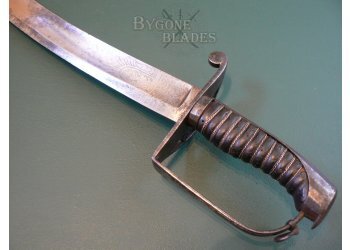 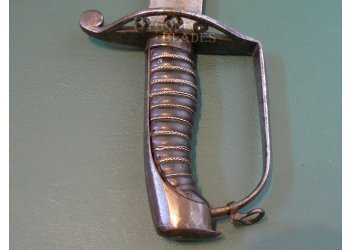 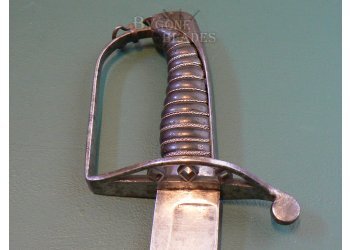 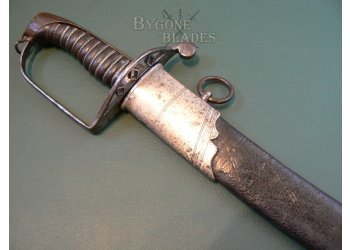 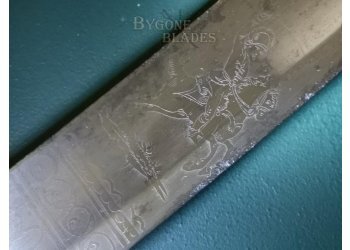 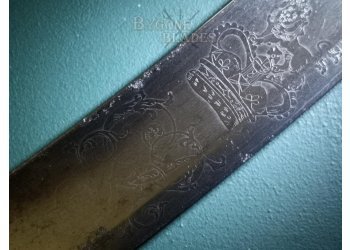 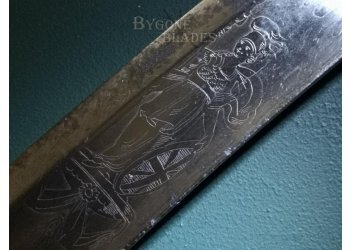 This rare and interesting Dragoon sabre dates to the turn of the 18th and 19th Century and would have been in service during the Peninsular and Napoleonic Wars.

Although a part of the cavalry, Dragoons carried a short, blunderbuss-style firearm (from which their name derived) and fought both on foot and from horseback. In 1806, several English Dragoon regiments were re-classified as Hussars (the first in the British army) although their role didn’t change.

The 656mm curved blade has a broad, flat spine above a wide fuller and terminates in a hatchet point. It is the ideal length for fighting on foot or in a melee on horseback. The blade retains its fighting edge and is double-edged for the last 140mm. The blade is likely to be a German import, probably Solingen made, with etching showing a scrolling foliate motif over a lion and Georgian crown. Below this is the Royal cypher of King George III and a mounted Dragoon officer. The obverse of the blade shows beribboned laurels, trophies of arms and Britannia.

The blade is in over-all very good condition for its 220 plus years, with some wear to the etching and patches of tarnish and stable pitting.

The 1788 Light Cavalry-style hilt has the recognisable back-strap incorporating a helmet pommel. The upper pommel plate extends over the knuckle-bow. The back-strap and grip collar are faceted. The stirrup shaped knuckle-bow is also reminiscent of the 1788 LC sabre with the addition of a curved guard incorporating three lozenge shapes. The rear of the stirrup has a floating loop for attaching a sword knot.

The contoured leather covered grip with twisted silver wire is in very good condition with minimal wear and a few old woodworm holes. The blade is firm in the hilt.

The sabre is complete with its original leather scabbard with steel mounts and two suspension rings. The leather is tooled with geometric patterns and is in very good condition. The stitching is intact and tight. The steel furniture has a salt and pepper patina with shallow pitting on the drag. The sabre sheathes and draws smoothly and is held firmly within the scabbard.

The locket of the scabbard bears a museum accession/catalogue number which matches that on the guard.

This is a rare and interesting example of a George III, Napoleonic period Dragoon officer’s sabre dating somewhere between the late 1780’s and early 1800’s.