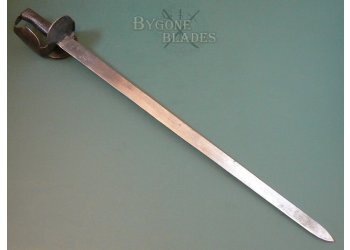 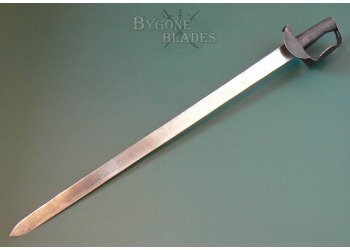 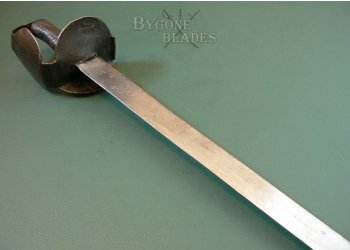 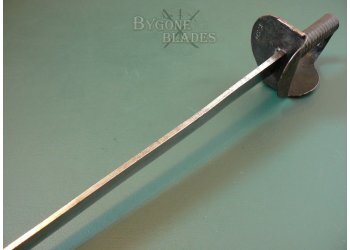 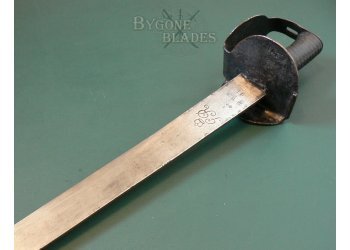 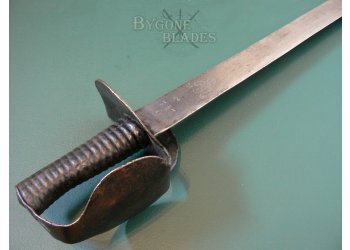 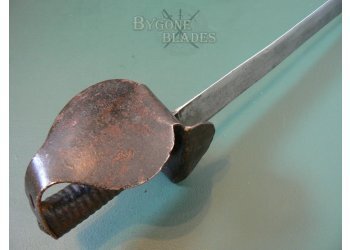 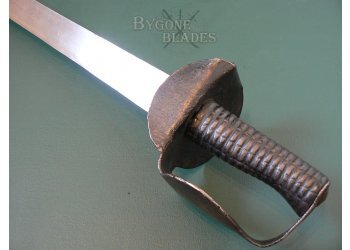 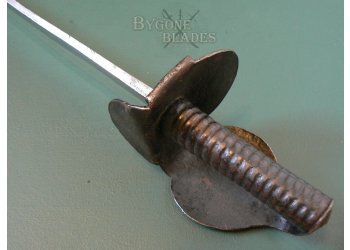 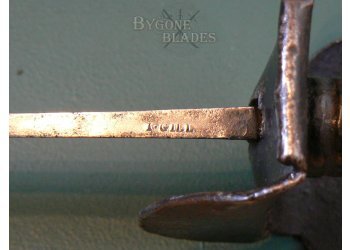 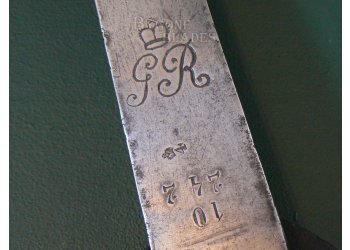 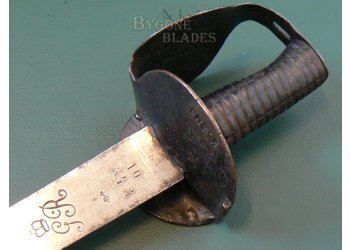 This scarce Napoleonic period, Royal Naval cutlass was made by Thomas Gill of Birmingham. Thomas Gill (1774-1826), received a government contract for 3,400 cutlasses in 1808. The order was completed in 1810.

The 732mm un-fullered blade has a flat spine, stamped with the maker’s name, T. Gill, and terminates in a spear point. The blade is in overall great condition given its service at sea, it has a pale patina and some small areas of very minor pitting.

This cutlass is exceptionally well marked. The forte bears the cypher of King George III and a crowned inspection number. Below this is stamped the ship’s inventory number, 10 over 242.

The steel guard has been officially modified by folding forward one half of the front disk to facilitate ease of wear (Ref: Naval Swords by P.W.G Annis, 1970). The guard is stamped with the gun station number, K. 2. 10.

The rear edge of the forward disk has a plain rolled quillon directed away from the hand. The knuckle-guard terminates over the pommel in a flat cap with a rectangular lanyard slot. The steel of the guard is in excellent condition.

The ribbed and shaped cast iron grip has the original black paint remaining. The blade is firm in the hilt.

Scabbards are rarely found. Most cutlasses were ordered without scabbards.

Records of the 1808 contract show that scabbards were sold separately, as on optional extra for the cost of 2/3d (£2.03p old money). The cutlasses were sold for 4/10d each. In comparison, a seaman earned around 12/3d per year so a cutlass was worth four months wages!

Because of the constant fear of mutiny (many Royal Navy seamen were pressed), seamen were not allowed personal weapons. Cutlasses were the ship’s property and were stored in racks without scabbards, ready for use.  The fact that this cutlass has been modified to facilitate wearing suggests that it was carried by a Boatswain or a similarly trusted seaman.

This is a scarce Napoleonic period, 1804 pattern Royal Naval cutlass from a pivotal period in European history, in overall fantastic condition and with excellent markings. With access to Royal Navy records, using the ship's inventory and gun station numbers it may be possible to establish which ship this cutlass saw service on during the Napoleonic Wars and beyond.