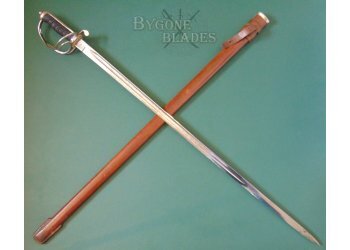 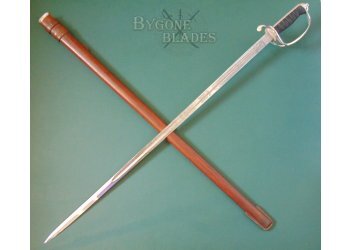 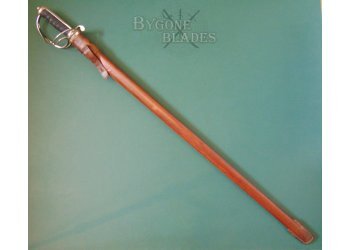 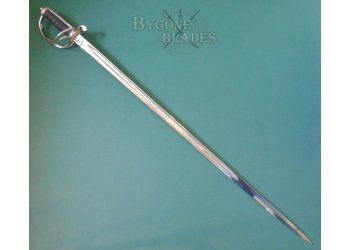 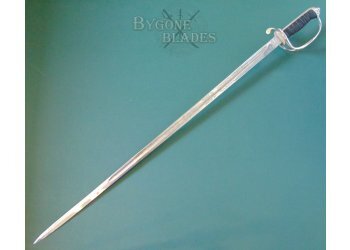 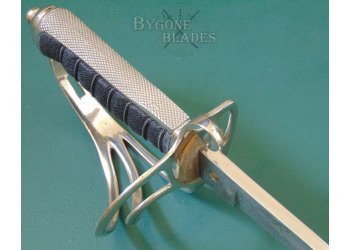 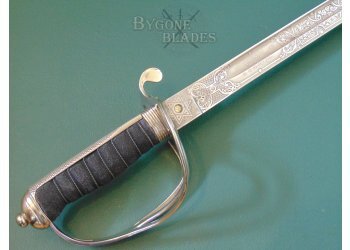 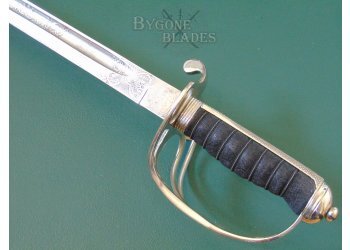 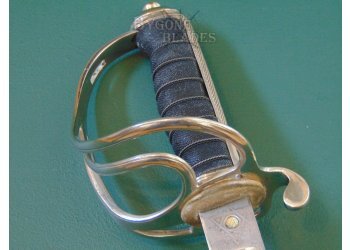 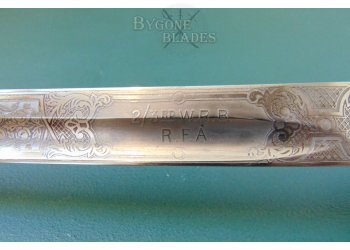 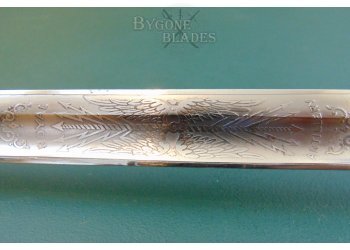 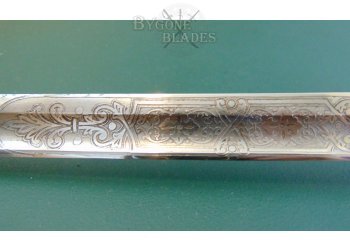 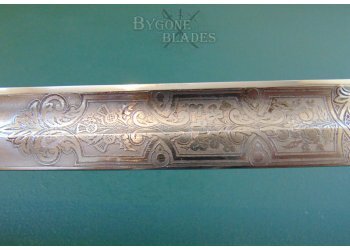 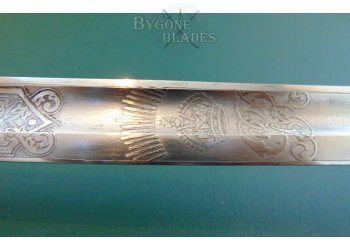 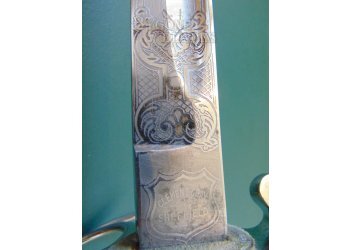 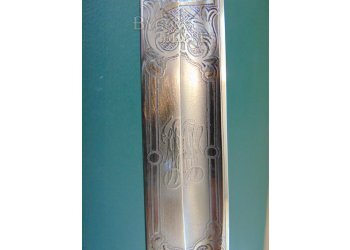 The 890mm thrusting blade has a flat spine and wide single fuller on both sides, tapering to a spear point. The spine is 8mm thick at the ricasso, which is 27mm wide.

The blade is in excellent condition with only a small area of tarnish on both sides at the point and on the edge.  The blade is beautifully and deeply etched with geometric and scrolled panels above the winged lightning bolts and field gun of the Royal Artillery. Three scrolled panels contain the Flowers of the Union – the rose, thistle and shamrock and a cartouche contains the regimental designation “2/3rd W.R.B” over “R.F.A,” indicating that the officer was in the 2nd Battalion, 3rd regiment of the West Riding Brigade, Royal Field Artillery.

The obverse of the blade is similarly etched with scrolled and geometric panels and the Flowers of the Union along with the crowned cypher of King George V, the Royal coat of arms and the badged, twin mottoes of the Royal Artillery and Royal Corps of Engineers – “Ubique, quo fas et gloria ducant,” (Everywhere, where right and glory lead). This motto was bestowed upon them by King William IV in 1832, the first part, “Ubique,” acknowledging the presence of the Royal Artillery and Royal Engineers in almost every conflict and replacing individual battle honours.

Below the Flowers of the Union, a panel contains the monogram of the original owner.

The ricasso bears a brass stud containing the word “Proved” over a central letter “G,” the proof disk of the maker Clement Gray. The obverse ricasso bears the makers details, Clement Gray, Sheffield. Clement Gray was the inventor and manufacturer of the famous WW1 "Clement Knuckle Duster Trench knife."

The nickel-plated three-bar guard is in excellent condition with all the plating intact and no bubbling or damage. The shagreen grip is excellent and the three strands of twisted silver wire are intact and tight.

The sword is complete with its brown leather over wood field scabbard. The scabbard is in excellent condition. The sword sheathes and draws smoothly and is held firmly within the scabbard.

This is an excellent example of a very well made and high quality Artillery officer’s sword by a prestigious wartime maker. The owner’s initials and regimental designation offering the opportunity for in-depth research into the military career of the owner and the working life of the sword.