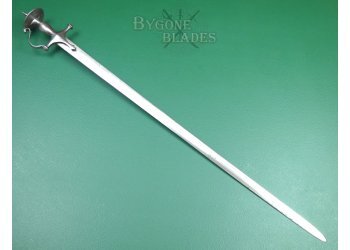 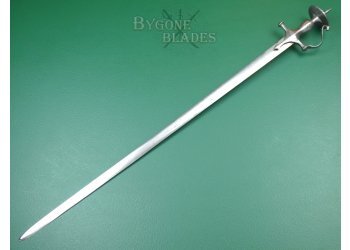 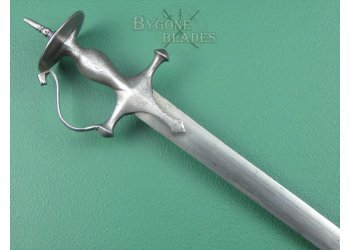 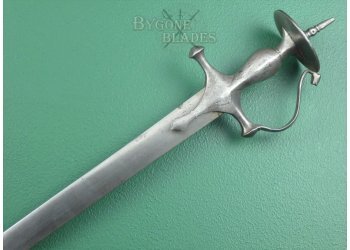 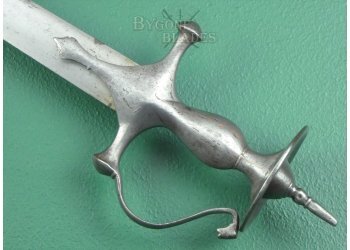 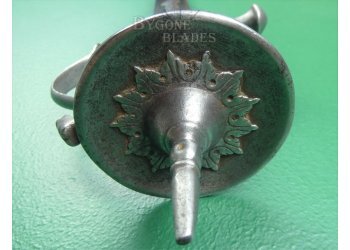 This Indo-Persian broadsword is similar to the kirach, one of the rarer Indian swords. The kirach is characterised by its straight blade. These rare swords were developed in northern India by the Marathas and were reserved for the use of elite troops. They can be found with both the Hindu basket hilt (as seen on Firanghi and Khanda) and with the Delhishahi hilt as on this example. This swords probably dates from the early to mid-18oo’s.

The 888mm broadsword blade is most likely a foreign import (firanghi). The double-edged blade has a lenticular cross-section and terminates in a spear point. The blade is in very good condition with some small patches of tarnish. The length of the blade suggests that the sword was intended for use from horseback.

The steel hilt is of the form known as Delhishahi (from Delhi) with a circular disc pommel, oval baluster grip, small knuckle-guard, short domed quillons and clubbed languets. The disc pommel incorporates a domed, flower-like disc with a faceted pommel spike. The blade is firm in the hilt.

This is an excellent example of a rare northern Indian Maratha’s broadsword kirach dating to the 19th Century.